This week we’ve been really busy down at one of Manchester’s most exciting production facilities. We’ve been producing a Matterport 3D virtual tour for Space Studios. Space is one of the largest film and production studios in the North of England. Due to the incredible size of the buildings we really tested the gear (and us) to it’s limits. After extensive planning and preparation we had to wait for a rare window of opportunity when all studios were clear of props and rigging. Early December 2017 we had a 2-day gap in productions to complete thousands of square feet of photography.

Day 1: We arrived at the studios and set to work. We captured from the reception right the way down to Space 04. The vast empty spaces in each sound stage really pushed the equipment to the max but we managed to get a fantastic quality tour.

Day 2: This was our last chance to capture any of the studios whilst they were free of productions. We continued where we left off and worked our way down the corridors capturing dressing rooms, make-up rooms, production offices through to the Space Camp canteen and out onto the service drive where we managed to complete the job just before it went dark. 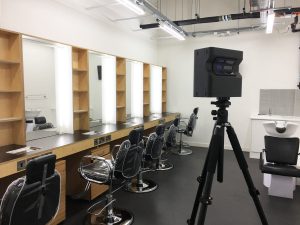 Day 3: We collected over 800 separate 3D scans of the building in 2 days so day three was spent editing our work, preparing the tour, uploading and adding in interactive tags and descriptions about each part of the building.

John Mariner, Client Liaison at Space Studios said: “We are all really pleased with what the guys at Planet Amazing have done for us. The 3D virtual tour of the Space Studios is fantastic quality, it’s clearer than my eyesight! The tour will really help with marketing our studios, particularly to international clients.”